Tati Westbrook is a YouTube vlogger and the brain behind Tati (formerly GlamLifeGuru); where she shares and uploads videos about makeup product reviews.

Tati Westbrook is a YouTube vlogger and the brain behind Tati (formerly GlamLifeGuru); This is where she shares and uploads videos about makeup product reviews, tutorial videos on make-ups and beauty tips.

The channel was launched in November 2010, and it has earned over 4 million subscribers and over 8 million views.

She is the daughter of Janis and talent agent/manager Cindy Krievins. Tati grew up in Seattle, Washington alongside her two younger sisters – Erika Krievins and Sabrina Krievins.

Tati has two young sisters. They are Erika Krievins and Sabrina Krievins.

Tati is married to longtime boyfriend James Westbrook. Tati and James got married in 2017, five years after their engagement. Tati announced o her viewers a day before they exchanged marital vows.

Before deciding to become, a YouTuber, Tati was interested in graphics. She worked as an image consultant.

She later relocated to Los Angeles, where she worked as a makeup artist and image consultant for some time and decided to start her own YouTube channel in 2010.

On her youtube channel, she shared her love for makeup with people who are interested in make-up and other beauty tips.

She emerged winner of the Allure Beauty Blogger Award, YouTube Breakout Beauty Celebrity and also appeared in Allure, Cosmopolitan and Glamour. She has also appeared as LA Based Beauty Correspondent for 100 episodes of Amazons Style Code Live.

In 2016, Tati launched the GlamLifeGuru app which is aimed at compiling highlights of her videos also features advice from her.

With the app, users can receive freebies and it also features a forum where makeup lovers can share tips and exchange ideas.

Things between Tati and James Charles seem to have gone west. Tati was James’ first mentor in the industry and James often talks about how much he loves Tati and how she’s the reason he got into makeup.

However, all that love seems to be lost after Tati dropped her 40+ minute video, titled “Bye Sister”. In the video, Tati explains the ongoing feud between her and James and her decision to cut her ties with James.

All the problems began in April during Weekend 1 of Coachella when James posted a sponsored post for Sugar Bear Hair to his Insta story.

Sugar Bear Hair is a huge competitor of Tati’s brand, Halo Beauty. Tati took this as betrayal, especially after all her and her husband have done to put “millions of dollars” in James’ pockets.

“Everybody says what they need to say and uses who they need to use, and I have had about enough,” Tati said in her story. “It’s not right.” 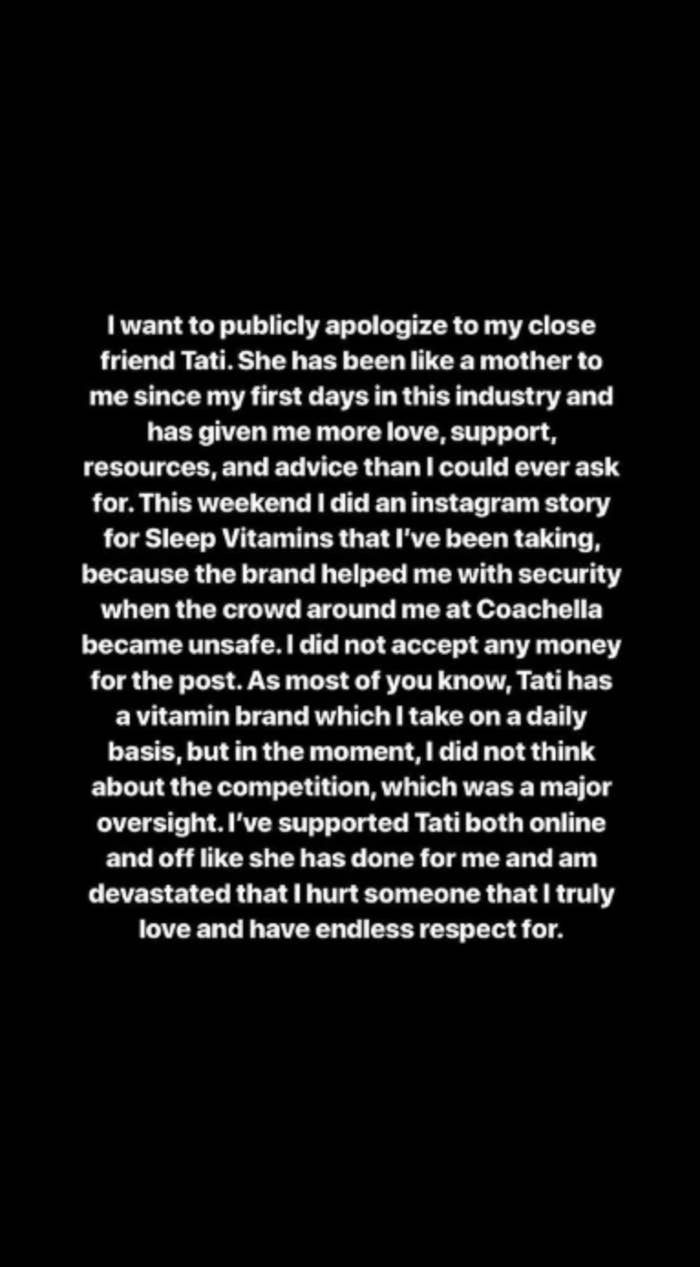 Tati, however, remained silent and didn’t publicly comment on this.

In her video, Tati mentioned that James said he doesn’t feel “comfortable” promoting Halo Beauty on his channel because he doesn’t want to promote supplements to his young audience. But he then went and did a deal with Sugar Bear Hair.

Tati said that she felt “used” because she and her husband have negotiated deals on James’ behalf, have mentored James, and have nurtured James.

She also said that another reason she did want anything with James is that he had been spreading lies about her.

She ended the video saying that this isn’t something she’s happy about or wanted to make public but felt like she had to because she didn’t want anything to be misconstrued.